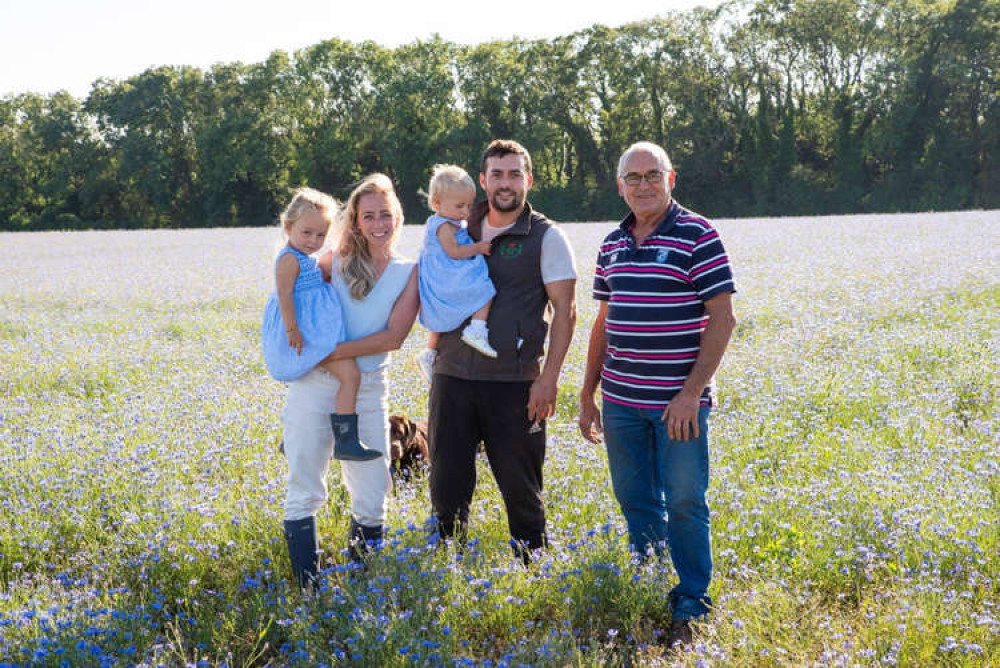 Campaigners are fighting to save a family farm east of Cardiff Airport from turning into a 45-acre business park.

The Jenkins family were asked to leave their farm by the end of July next year as the landowners want to build an industrial estate there.

Since 1935, four generations of the family have worked at Model Farm, on Port Road in the Vale of Glamorgan.

Legal and General, a financial services firm which owns the land, received planning permission last month to build a business park on the farm.

A campaign group set up to save Model Farm is quickly gaining thousands of supporters, raising money for legal fees to appeal the decision, and planning a protest by the Senedd.

Politicians have slammed Vale of Glamorgan council for granting planning permission, which in the same month declared a 'nature emergency' and pledged to protect the environment.

Legal and General said the business park would create more than 3,000 jobs and bring in £94 million of wages each year. The council said it would help support the local economy.

Kelly Ball lives and works at Model Farm with her husband Rhys Jenkins and their two daughters, aged one and three years old, and Rhys's father Gethin. She said the family is still in shock and is unsure where they will move to next year.

She said: "We've been given 12 months, until July 31 next year. They handed our notice to use on July 31 just gone, with a letter delivered by an enforcement officer. We have had no contact with Legal and General whatsoever. We thought they would at least have the decency to sit us down and talk to us about it. It's shocking how they're treating us.

"Rhys will try to carry on the farm. Maybe something might come up between now and in 12 months time. But at the minute it's all up in the air. As a family we're just devastated."

The family rear beef cattle and grow cereal crops and wildflowers, selling wildflower seeds across Wales. Model Farm lies north of Porthkerry Country Park. As part of the plans, Legal and General will give about 49 hectares of land towards extending the country park.

But despite the extension, local campaigners are claiming the business park will have a negative impact on the local environment, harming biodiversity and increasing congestion.

Vale Communities Unite, a community group set up to save Model Farm, has launched a fundraiser for legal fees, and is planning to protest outside the Welsh Parliament at 11am on Saturday, August 21.

Gail Elizabeth, one of the campaigners, said: "I didn't think it would get this far. When permission was granted I was horrified. There's huge opposition from locals, and over 1,000 residents opposed it.

"The farmers have supported us over a number of years in various ways. They're huge in the community and have been for years. The main road out of Rhoose, Porthkerry Road, has flooded on a number of occasions, so we were trapped. And the farmer pumped out the water for us and cleared the road."

"There's a huge range of biodiversity on that site. The council is rewilding in other places like Porthkerry Country Park, so why concrete over just above the park? It just goes against all their aims.

"When you drive home you have a beautiful view of the sea, the woodland and the fields, and you see all the birds, and the view of the viaduct. That view is going to be obliterated. This is being enforced upon us and we feel very angry about that.

"The community were in uproar after the decision was made. We were upset by how our comments had been disregarded. What's the point of a public consultation and having a planning meeting if all your comments are going to be dismissed? The planning system needs to have a rethink."

They both highlighted potential issues with traffic congestion the business park could cause. They claimed traffic surveys used in the planning application relied on future improvements to public transport, an estimated increase in people working from home and fewer commuting, and added how the lack of a proposed M4 link road would exacerbate problems.

"The Labour council's decision is disastrous for the environment, will mean more congestion and greater pollution, and goes against everything their colleagues say about climate change in Cardiff Bay."

Councillor Ian Johnson, Plaid Cymru group leader on the Vale council, said: "I cannot see how this development can sit alongside the climate emergency and nature emergency declared by the Senedd and Vale of Glamorgan council.

"We need an urgent statement from the Welsh Government about how the climate emergency and nature emergency affect planning regulations and guidance, and whether or not they support these plans for development at Model Farm."

The council defended its decision by saying the land has been included in the local development plan since 2011, while Legal and General said the plans would create local jobs, bring in millions in new wages, and would give some land to Porthkerry Country Park.

A Vale of Glamorgan council spokesperson said: "This planning application was approved by the council's planning committee last month following full consideration of all relevant factors, including those relating to its environmental impact. A report explaining exactly how the decision was reached can be found on the council's website.

"This addresses in detail concerns relating to the climate emergency, local objections and support. It also notes that recently adopted Welsh Government policy supports the principle of this development given its strategic location, with connections to Wales' only airport.

"Cardiff Airport is an essential part of Wales' transport infrastructure. As an international gateway, it connects Wales to the rest of the world and helps drive the country's economy. The wider Cardiff Airport and Bro St Athan Enterprise Zone also offer opportunities for investment, both within its parameters and surrounding areas of the Vale.

"This site has long been identified as a location for large-scale employment. It was first designated for this purpose in the council's 2011 local development plan (LDP), a document that was subsequently adopted by the then Conservative-led council in 2017. That followed an examination in public led by a Welsh Government-appointed Planning Inspector.

"The LDP has been monitored on an annual basis since its adoption, with a report submitted to the Welsh Government every October. It is a legal requirement that all planning decisions are taken in accordance with the LDP unless material considerations indicate otherwise."

A spokesperson from Legal and General said: "Forming part of the council's local development plan since 2017, this important project has a strategic role to play in delivering wider economic, social and environmental benefits, including the capacity to accommodate over 3,000 jobs and supporting £94 million in wages each year.

"An environmental assessment underpins the plans for the site and the management and enhancement of natural habitats and wildlife are a key priority. In addition, over half the site — equivalent to circa 67 football pitches — will be handed over to Porthkerry Country Park, extending leisure and recreation facilities.

"Consideration of development opportunities of other alternative sites would have been extensively consulted on as part of the council's local plan process. We sympathise with the tenant, Mr Jenkins, and will continue to communicate with him as part of the next steps in the process of enabling the delivery of this site and its wider community benefits."

The campaigners vowed to continue fighting the decision to grant planning permission.

Ms Levett, the Vale Communities Unite campaigner, said: "We're going to fight this decision all the way. We're not nimbys and it's not just about us. You're saying don't build on green land and here you are still building on green land.

Valeways adds a Stress Buster to its healthy walking programme