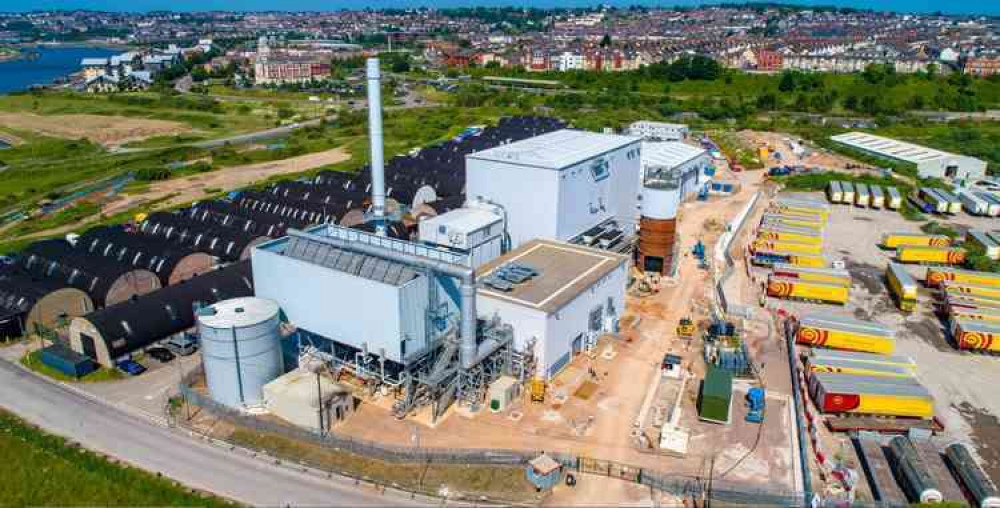 A biomass burner in Barry is facing enforcement action after "a number of discrepancies" were found with its plans.

Vale of Glamorgan council could force developers to close down and demolish the site, under planning rules.

The wood-burning power plant was built off Woodham Road, just south-east of Barry Docks train station, but has not yet become fully operational.

However council officers claim the plant is significantly different to its plans which were approved in 2015, which could mean the buildings are unauthorised.

Building work began in 2016 and soon caused complaints about noise, dust, hours of construction and air quality. The following year a controversy arose around a giant water tank, which was built without planning permission.

Then in July last year council inspectors found "a number of discrepancies between the consented scheme and that which had been built". These included the layout and elevation; additional structures, plant and equipment; and an extension of the site to the north.

After months of negotiating, the council has warned the biomass developers that the power plant was unauthorised and threatened to take enforcement action by preventing the plant from becoming fully operational.

During the meeting, Marcus Goldsworthy, the council's head of planning, explained why enforcement action was urgently needed.

He said: "We have got to a bit of an impasse. We are very concerned about the possibility of this development being deemed lawful by virtue of having four years since construction.

"We are very nervous about the position that could arise where—were the development to exist on site for four years and were it deemed to be so different from the original plans as to be not covered by that approval—then we could get into a position where the council was looking at a lawful development without any conditions controlling it."

Under planning laws if a development without permission was built more than four years ago, it is deemed lawful. This means the council couldn't enforce any planning conditions, such as controlling air quality, waste management, dust, light pollution, and noise mitigation. But if the council takes enforcement action, then this stops the clock on the four-year deadline.

While the enforcement notice legally asks the developers to close down the plant and demolish the buildings, Mr Goldsworthy said the action was intended to encourage the developer to "regularise" the power plant, by properly applying for planning permission for all the discrepancies the council found.

Developers told the council they planned to appeal the enforcement decision, asking the Welsh Government to overturn it. In a letter to the planning department, they said the action was "totally disproportionate".

Steve Butler, from Sol Environment and on behalf of Barry Biomass, said: "It would not be expedient for enforcement action to be brought because the alleged breaches can be addressed by other means.

"If members were minded to accept the officer's recommendation and authorise the issuing of an enforcement notice containing these requirements, my client would have no option other than to appeal."

It's unclear what will happen next, and how long the appeal process might take. But another important new factor is how the power plant would impact the environment.

The Welsh Government has belatedly decided the power plant is big enough to need an environmental impact assessment [EIA], for which campaigners have been calling for years.

Climate change minister Julie James said this assessment shouldn't stop the power plant from becoming fully operational, as that could cause the developer to lose money.

Writing to Docks Incinerator Action Group in July, she said: "If activity at the plant is suspended—delaying the plant becoming fully operational while an EIA is undertaken—the time taken to prepare an environmental statement will cost the developer a loss of earnings and the wider economy will not benefit from permanent employment offered by the plant."

Needing an EIA means the public will be consulted on how the power plant will potentially affect the environment. The process is likely to take around four months.

In the letter Minister Ms James also downplayed the impact of the power plant on climate change. Although burning almost 200 tonnes of wood daily, the developer claimed this would actually withdraw 32,644 tonnes of carbon dioxide from the atmosphere.

When applying for an environmental permit from Natural Resources Wales, Barry Biomass submitted estimates of the plant's 'global warming potential'. This included estimating how much carbon dioxide would be emitted, balanced against how much carbon would be saved from the "export of electricity to the public supply by displacement of burning of virgin fuels".

This means the wood used at the power plant is technically 'waste wood' and counted as renewable energy. But scientists and campaigners are becoming increasingly concerned that burning woody biomass for electricity is fuelling demand for deforestation, and burning wood emits more carbon dioxide than coal.

In her letter to campaigners, the exact figures for the estimates of emissions at the power plant were not included. Ms James said: "I currently have no reason to disagree with NRW's conclusion … that the impact on climate change is not significant".